Hello, everyone! Today I would like to introduce Touhou Mystia’s Izakaya, a restaurant business simulator cooking game that has become a sensation in the Chinese Touhou fandom.

Introduction – What is Touhou Mystia’s Izakaya?

It is a restaurant management game, but with different gameplay elements like collecting items, rhythm minigames, and friend relationship systems included. And of course, as the name suggests, Mystia Lorelei as the player character.

The game went into early access on June 16, 2021, and was officially released on October 10, 2021. Currently, the game is available  in two languages: Chinese and English. It also comes with two DLC expansions and three original soundtrack sets.

Mystia Lorelei is a young night sparrow youkai who has a dream to become the most popular izakaya proprietor, and to also hold the biggest concert in Gensokyo. Day after day, she worked hard to make a name for herself, and to make her dreams come true. But, one day, a horrifying customer showed up and ravaged her dreams and future.

However, a hakutaku comes to rescue Mystia, and resets everything… 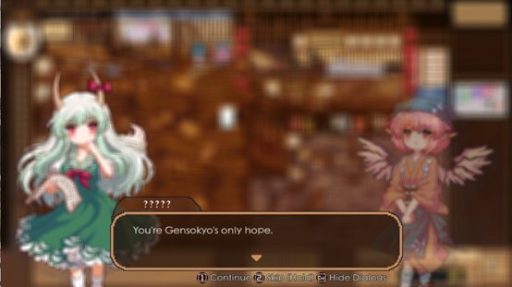 Therefore, Mystia had to restart from scratch. And the first thing she saw outside of her house was Kyouko getting into trouble with Chen.

In order to help her partner out of trouble, Mystia took on Kyouko’s debt, and thus started Mystia’s life of repaying the debt to the Yakumo family, while accomplishing her dreams to become the most popular izakaya owner in Gensokyo…

The core mechanics, as a restaurant business managing game, are relatively easy to understand. But, with a drop of collecting, rhythm game, and friendship bond mechanics added into the mix, variety adds some more interesting aspects into the game.

In the daytime, you collect or buy ingredients and drinks; at night, you run the stall, and serve the customers by cooking foods with the ingredients you got, along with your drinks. 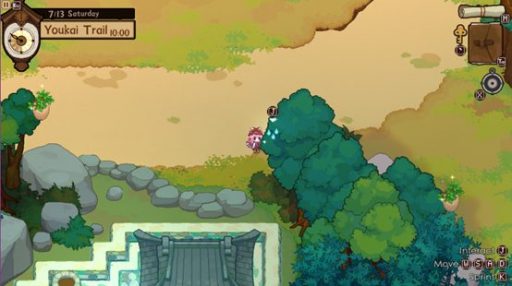 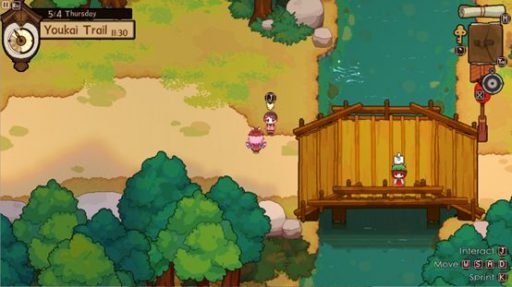 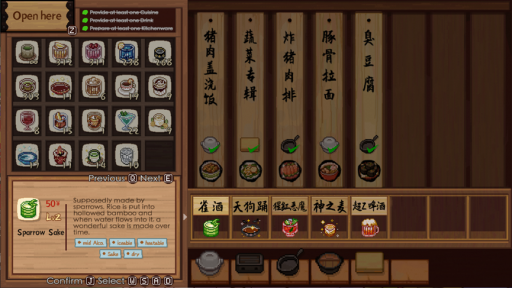 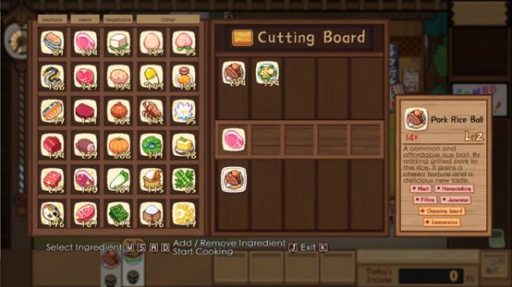 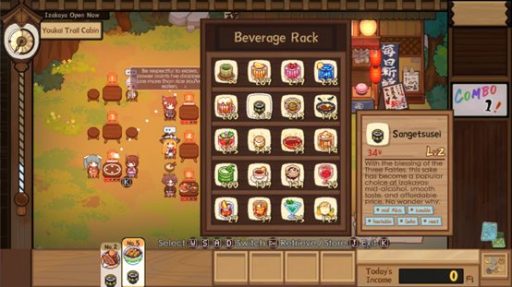 As the story develops, you will unlock more places to visit and to open your stall in. There are ingredients that you can only get at a certain location or at a certain time as well, but you only have a limited time to collect everything. Try to do some planning, and think about what you should prioritize before taking action.

These are understandable mechanics for a daily routine. However, there are several twists throughout the process. It is not as simple as cooking the food and serving it to your customers. Before cooking, you will see a rhythm minigame where there is a sequence of notes to hit before the food is prepared. You will want to hit them perfectly, as they will give you benefits for serving your customers.

Also, during the day, you will meet new friends to chat with; while at night, they might visit your stall to have some supper. Those friends can be known as “rare customers”. Their orders may look demanding, but they will reward you with ingredients, or give you status buffs to help you restock, or to operate the stall better… if you serve them adequately, that is. Just make sure you do not treat them badly, or else they might ruin your stall by stealing ingredients, giving you debuffs, kicking other customers out, and so on. After all, they all have their own preferences and disposable incomes to keep track of.

Besides, in order to cook a variety of food, you will need many ingredients and recipes, and those rare customers can help you obtain them. Running a restaurant can be tiresome, so collecting their rewards on the job is definitely a good thing to do. 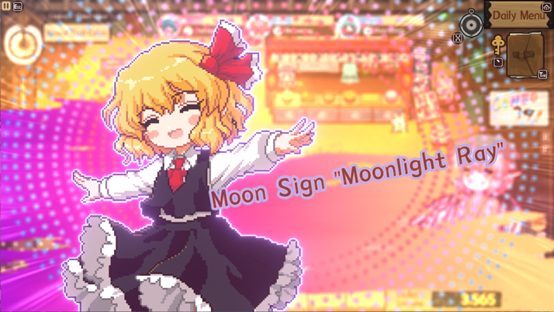 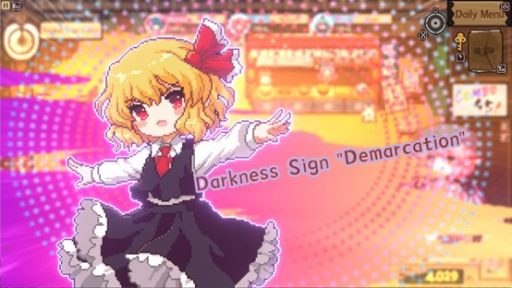 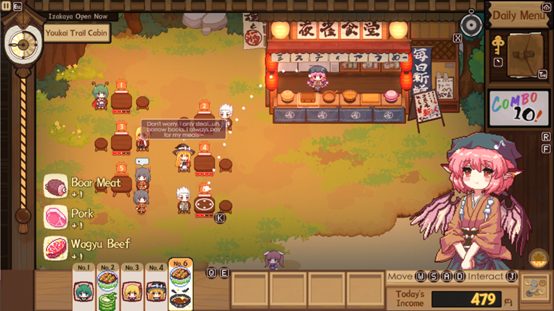 Also, once you max out the rare customers’ bonds, they can give you certain permanent benefits; either giving you a new costume, an ornament that gives a permanent buff in the stall, or giving you permission to ask for help collecting the ingredients in their location.

Outside of rare customers, if certain conditions have been met, you will be introduced to people called “partners”, who can be assigned to one of three occupations: assistant cook, waitress, or drink server. They can either help you cook food, serve meals, or serve drinks, so that you can multitask easier. The game starts off with Kyouko as the only partner you have, but as you increase your friends’ bonds and progress the story, you will meet more of them. Although they might cost some of your revenue, you should be able to find your job easier to do and more efficient with their assistance.

Beyond rare customers and helpers, you may also face several quests to complete, both main ones or sub ones. Main ones help you progress the story further, as well as unlocking new spots to open your stall, while sub ones can give you more resources to collect, expand your stall, level up your friends’ bond, or give you currencies to help you expand your arsenal of kitchen utensils. To do them may take time, but they can definitely help you reach your goals in the long run.

There are many music tracks in the game, which can be separated into three categories: map, atmosphere, and other.

Different map themes will play during the day depending on your current location. Similarly at night different themes not only depend on where you open the shop, but there are 3 variations of the theme for each location, depending on the stall’s overall atmosphere.

For me, I think the music is the essence of this game, because of the overall soothing and calm nature of the game’s style. I especially like the atmosphere themes, because not only do they symbolize what the location is like, but they also help you blend into the atmosphere better.

From Youkai Trail’s playful, festival-like theme; Human Village’s warmhearted, human-touching theme; to Scarlet Devil Mansion’s glamorous, lightful theme, you can feel yourself being inside of the game; into the stall, with Mystia, and her friends.

Out of all the atmosphere themes, the ones in Forest of Magic are my favorite. Its themes are dreamlike and wonderful, and it gives off an Alice in Wonderland feeling, along with the orchestra.

Not only that, even the boss fights have atmosphere music, and it can make you feel the fierce confrontation going on in the stall.

Try relaxing yourself in Gensokyo with Mystia, after a busy day in the real world with the music.

Ever since the game went into early access, the game has been a sensation in the Touhou fandom, because of its pixelated art style, soothing atmosphere, and the gameplay. Several memes about the game were also born, as the game itself has difficult parts, different references to characters, and the fact you can squeeze profits off of rare customers through their buffs.

One such meme is about how “Cultural Background” tagged food and customers can be a setback to deal with, since you will not have access to cuisines or ingredients with the tag, until you manage to become acquaintances with the rare customers in Human Village. If those rare customers ask for food with that tag, it is impossible to trigger their reward due to requirements not being met. 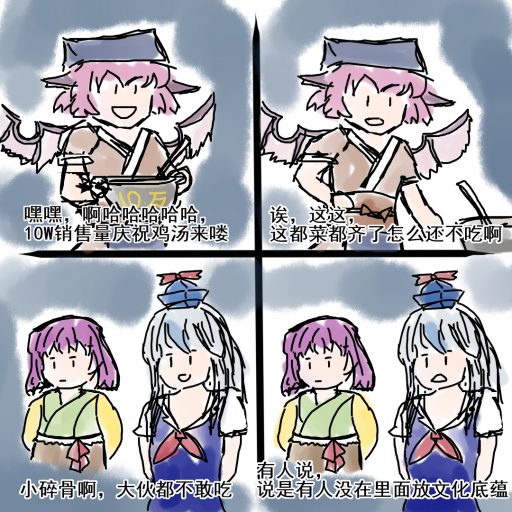 Eh, uh, the dishes are all here, why didn’t you eat up?

Someone said that somebody didn’t put “cultural background” in it.

OAn example of this meme being used

On the other hand, since the game reached 100,000 copies sold, the game designers decided to request the community for fan arts to celebrate this moment, and they also put those fan arts in the game’s album. It was not just restricted to illustrations, so there are also memes, handcrafts, and even MMDs.

Here are some of the results.

Given by the examples on top, you can tell that this game was quite the sensation. And the game is almost a year old!

I would recommend this game to people who have an interest in management games, and those who want a casual experience, or a small break in their busy life. If you are a Mystia fan, then congratulations! This is the perfect game for you.

Personally speaking, I would say that restaurant management games can easily catch my attention, but many do not get as interesting as Touhou Mystia’s Izakaya.

The innovative game style integrates many elements, and the work process is split evenly and clearly with daytime as your free time, and nighttime as your work time.

I bought the game back when it was on early access. Before buying the game, I hesitated about the decision. Nonetheless, when I started to play the game for a few hours, its relaxing atmosphere blew my doubting mind to outer space.

This game is very casual, and it can even be funny at times, when you see the massive income you make off Marisa. The game still has its bugs and flaws, nevertheless. But the game designers will keep on updating the game to keep it fresh and clean, and they will work late hours to fix the devastating ones. So, I want to give a shout out to the game creators who worked so hard to make such a beautiful, relaxing, and creative game come to life! 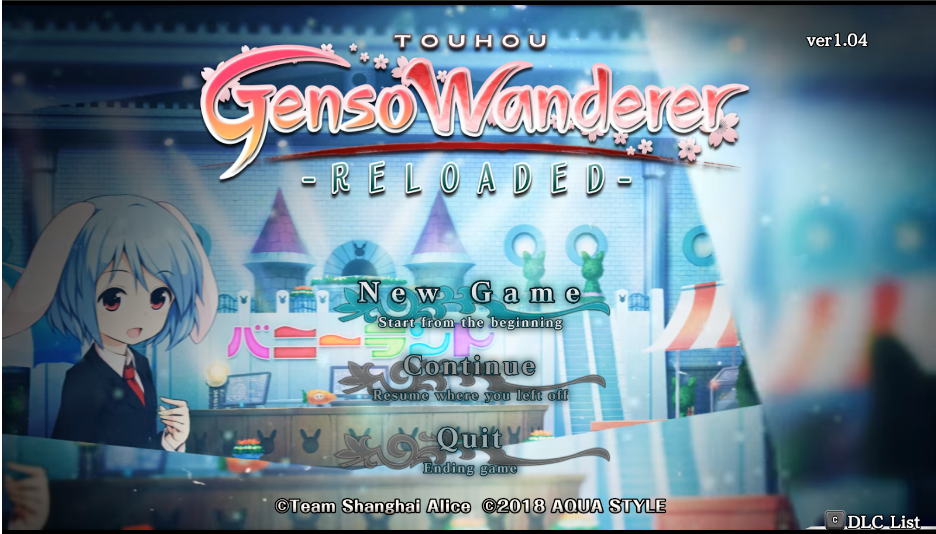 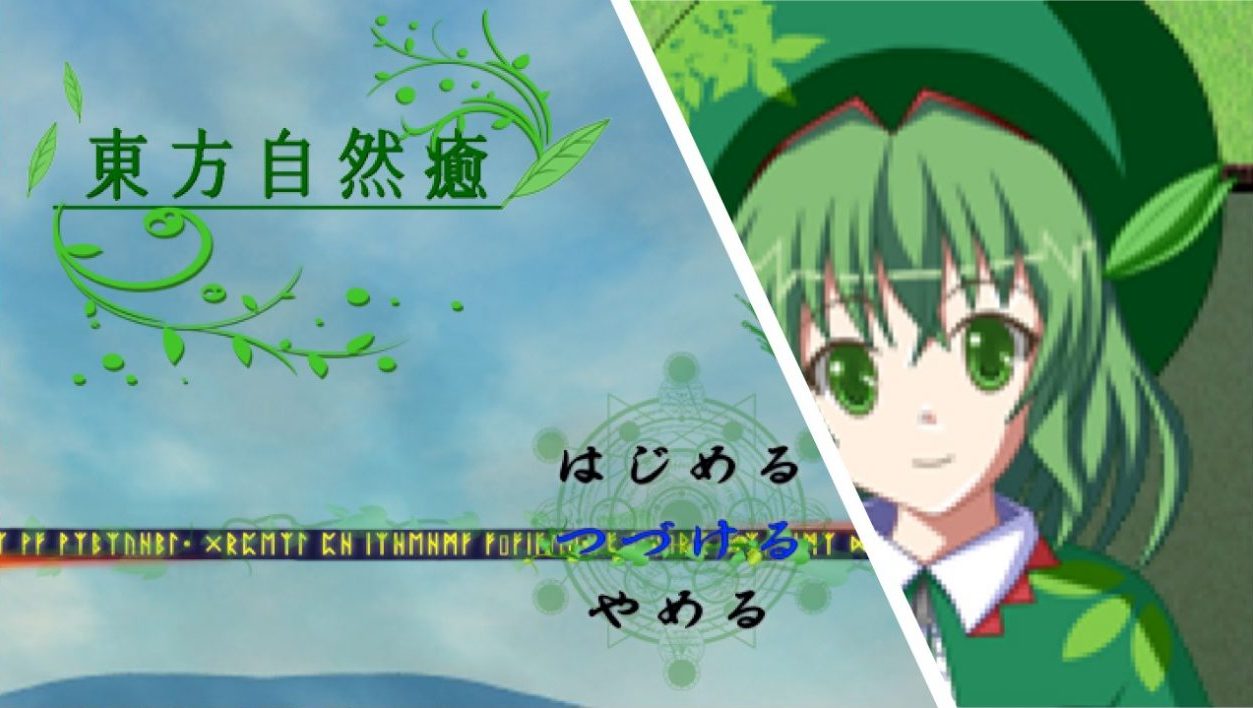 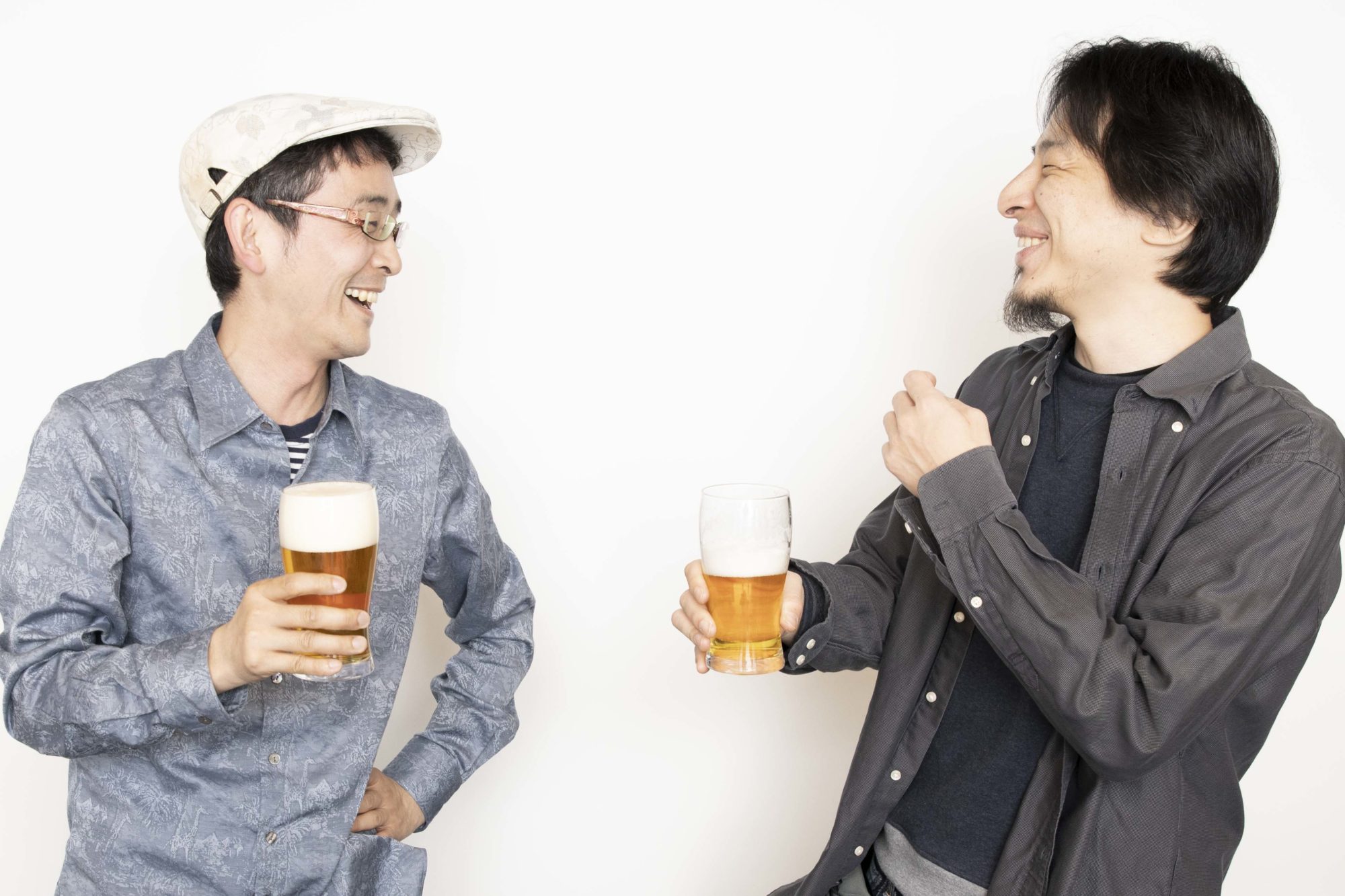 ZUN Didn’t Make It Into Comiket?! The Embodiment of Scarlet Devil and the Birth of Touhou’s Spell Cards, Story, and Characterization to Make Bullet Patterns Interesting 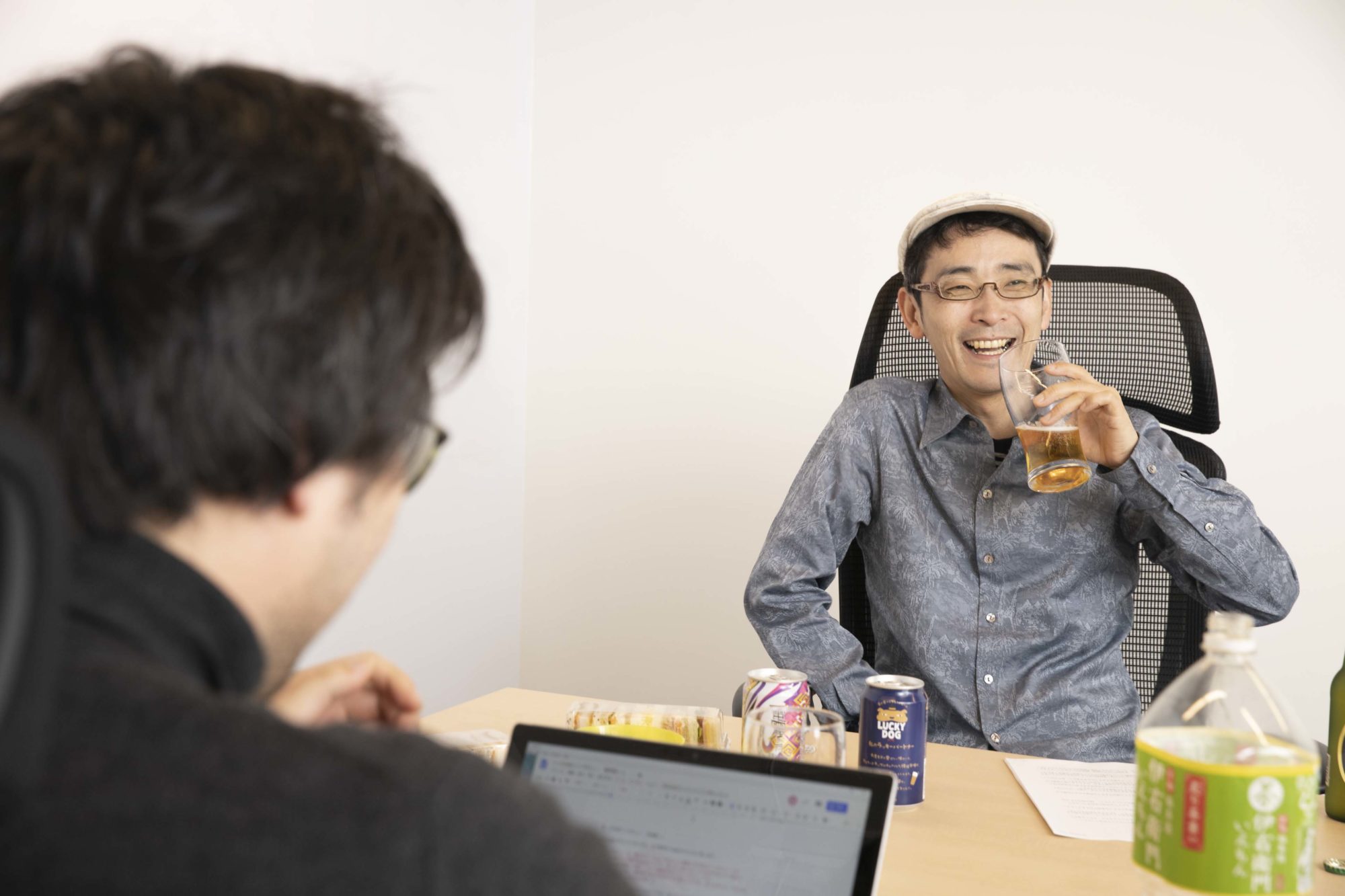 ZUN Salaryman Days: First Worked in the Arcades and Then His Grand Return to Comiket